To main content To navigation
Our projectsNorth – Southline IJ Tunnel

Engineering, preparation and execution of transport and immersion of three tunnel elements for the North – South Line in Amsterdam including diving support during sand flow. 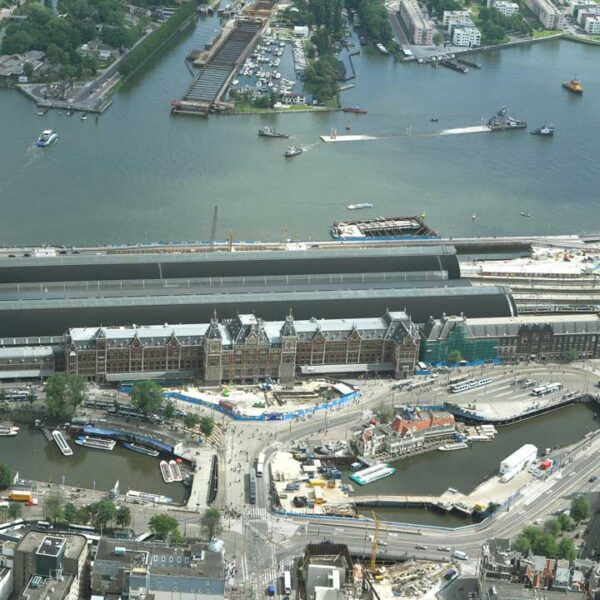 Transport next to Amsterdam Central Station

The immersed tunnel in the river IJ, situated next to Amsterdam Central Station, consists of three tunnel elements. For the connection on the north side, the last tunnel element widens from 11,3 to 14,0m. All three elements are curved in both horizontal and vertical direction causing variations of loads and movements during immersion.

The tunnel elements were built inside a casting basin in the northern approach of the tunnel together with the tunnel element for Metrostation CS. The tunnel elements were floated while flooding the casting basin and transported through the river IJ and the North Sea Channel, to a temporary mooring location in the Suezhaven at a distance of seven nautical miles. During transport the shipping lane could not be blocked, shipping was regulated.
Part of the IJ-tunnel crosses the shipping lane. In this part a dredged trench with sloped sides was formed. Near the embankments a trench was dredged between strutted cofferdams. The immersion was done by two sheer legs which could be used for all three elements.

During the operations, the river was blocked for all shipping for 24 hours and the operations were planned in between the arrivals and departures of cruise ships visiting the city of Amsterdam. Such large ships should not only influence the immersion planning but also affect the already immersed tunnel elements by inducing extra forces.

After immersion the tunnel elements were placed on a primary support at the front and on two secondary pin supports at 40m from the rear of the element. For the primary support a new system was developed combining the support function with hydraulic pulling jacks for the initial connection to the previous element.

Between the second and third tunnel element a closure joint was situated. Two wedges and watertight panels were used to dewater the closure joint. A traditional sand flow system was used to create the final foundation for the tunnel elements.