The engineering, work preparation and execution of floatation, transport, “immersion” / winch down of a tunnel element for the aqueduct in the intersection of the provincial road N57 with the channel “Kanaal door Walcheren” at Middelburg. The works included the engineering, delivery and assembly of three steel bulkheads and dive support during sand flow.

The aqueduct is named after a former gate in Middelburg, the Dampoort, built between 1585-1591 by Pieter van Loo. 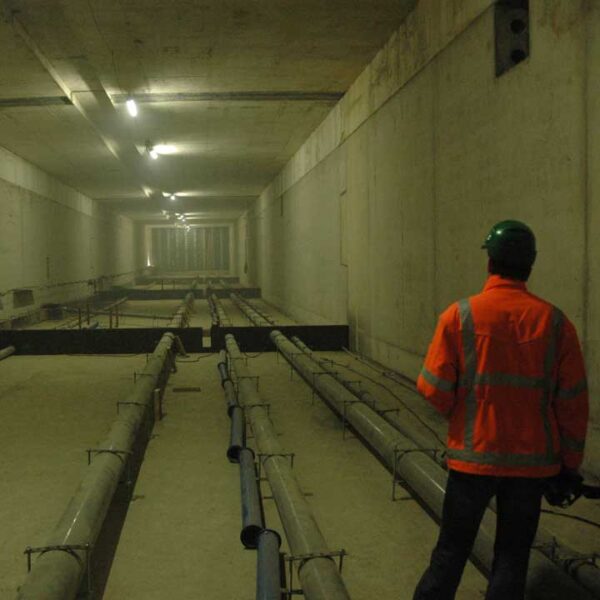 The immersion of this tunnel element was not done in the traditional way. In this project the tunnel element was pulled down towards its final position. Before immersion the freeboard of the element was reduced to 5 centimeters by adding ballast concrete to minimize the pulling forces. For pulling down four winches were used on top of the sheet piled trench walls in the embankments. The winch wires were connected to the roof of the tunnel via an anchor point in the underwater concrete of the casting basin.

During lowering the element was guided in both transverse and longitudinal direction until it finally touched the temporary jacking system in vertical direction. While continuously pulling down the aqueduct, the sand flowed foundation was formed and ballast concrete was added to create negative buoyancy. Finally the pulling construction was demobilized.

For this project our in house developed modular steel bulkheads were used, having the advantage of a quick mobilization and demobilization. At the rear end of the tunnel element a dry closure joint was created so the approached could be built directly connected to the immersed part of the aqueduct.