Description of the activities
Design, engineering, preparation and execution of floatation, transport and immersion of 4 tunnel elements. Including the assembly and removal of 9 modular steel bulkheads and diving works in all stages.

At 2450 metres, the Roertunnel is the longest land tunnel for car traffic in the Netherlands. 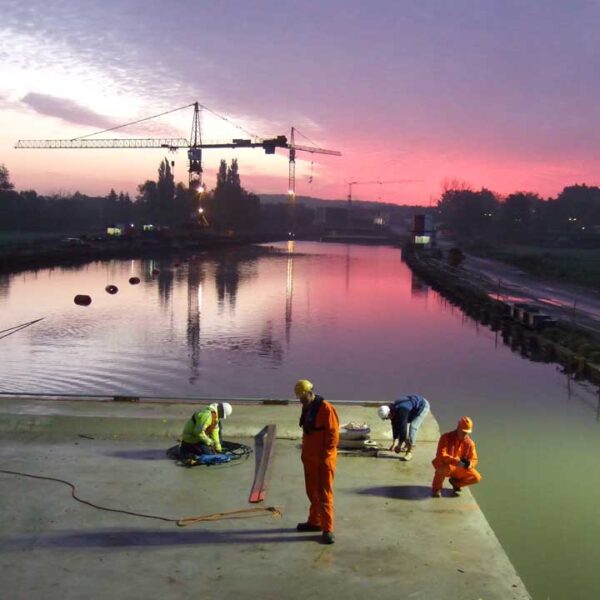 All four tunnel elements were immersed using two steel cross beams seated on the sheet pile walls of the cofferdam. Both beams were equipped with two immersion winches. After immersion the cross beams were transported to their next location using pontoons. For realignment, triangular trussed girders were placed between cofferdam and tunnel element.

For the tunnel element crossing the Roer, these girders were also used to prevent the element to get to close to the immersion trench walls thereby closing of the flow in river.

The Roertunnel was the first project in which our in house developed modular steel bulkheads were used, having the advantage of a quick mobilization and demobilization. In the past bulkheads where mostly constructed as concrete walls supported by steel columns, a time-consuming construction method with which major noise and dust occurred during the removal of the bulkheads.

The tunnel was founded on a gravel bed and a dry closure joint was created so the adjacent approach could be built directly against the last tunnel element.

We made a leaflet with all the information about the project. Easy share or store.