To main content To navigation
Our projectsBusan Geoje Fixed Link

Description of the activities
Design and engineering of the temporary works for the 18 tunnel elements. Execution of floatation, transport and immersion of the tunnel elements and the installation of the formwork for the closure joint. 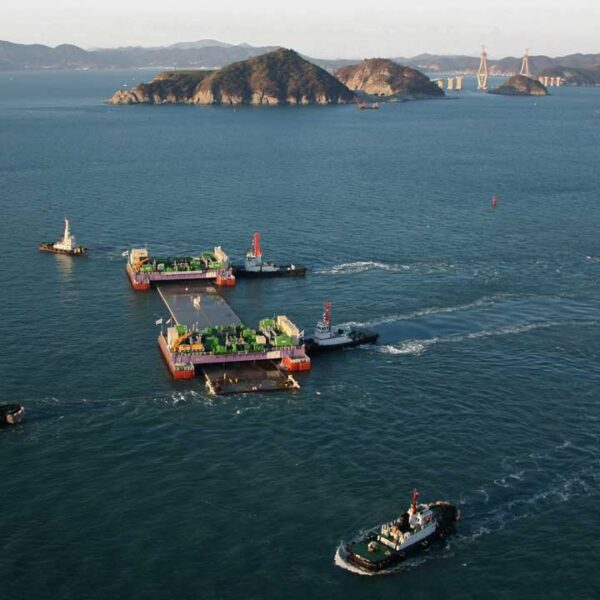 With this immersed tunnel a road connection was realized in the south eastern part of South Korea between the city of Busan and Geoje Island. The 2×2 lane immersed road tunnel is one of the longest and deepest in the world and was immersed under sea conditions. Especially these sea conditions resulted in several innovative solutions for this project.
The tunnel elements were constructed in a temporary precast yard about 40 km from the immersion area. After flooding the dock, the tunnel elements were floated up one by one and transported to a nearby mooring location. Here the elements could be stored waiting for favourable wave and weather conditions. The immersion was done by using catamaran pontoons and could, due to weather restrictions, only take place from October to May. The tunnel elements were founded on a gravel bed.
As the tunnel elements were very sensitive to currents and waves, the immersion spread was tested on model scale in a maritime laboratory. Furthermore a wave forecasting system was set up to check if the sea conditions were within the limits for all phases from commencing transport to a fixed tunnel element on the seabed. Other innovative solutions developed specifically for this project are:

External Positioning System (EPS). With the EPS the tunnel element could be placed 1 meter from the previous one and stepped forward for the final connection, thus eliminating large movements while connecting. The EPS was also equipped with a realignment system.
Survey system. Because of the large depth and the distance from shore a traditional survey system could not be used. For this project a combined system was developed using GPS, a taut wire, a USBL system and distance sensors creating an increasing accuracy from the transport phase up to the joining of the tunnel elements.
•
Central operation. As no access shaft was used in this project, all equipment inside the tunnel element was remotely controlled and monitored from a command unit on one of the pontoons. All winches were operated from the command unit as well.